For those of you who may have hiked Herman Gulch from its 10,000 foot trailhead 4 miles to Herman Lake, you’ve viewed the unreal scenery, experienced ranges of hiking difficulty, and maybe saw an elk or two. But that small creek you heard while walking the trail maintains a strong ecosystem that has enabled cutthroat trout to survive and grow for years. It’s a creek that may not be the width of your couch at times, however, it holds a surprising large amount of trout and a variety of bug life.

The creek was identified a prime location for a greenback cutthroat trout reintroduction by Colorado Parks and Wildlife (CPW). So, with direction from the West Denver chapter of Trout Unlimited, The Greenbacks, with multiple volunteers, headed out last Friday for a fun adventure to catch as many fish as we could in order to transport them into Clear Creek.

The stream was split into 5 beats with each beat getting 2 buckets and 4 anglers. The goal was to catch as many trout as possible and then transport them to holding pens downstream.

Overall, we collectively caught and transported approximately 100 healthy trout from the small creek – a very successful day indeed. Future plans from CPW include shocking and removing more trout, then ensuring all trout are removed over the winter. The hope is to reintroduce native greenback cutthroat trout into the stream as early as next spring.

As we continue our work to reintroduce native greenbacks back to Colorado waters and their native watersheds, we’ll keep you updated with ongoing projects.

Special thanks to West Denver Chapter of Colorado Trout Unlimited for organizing and Colorado Parks and Wildlife for the opportunity to relocate a variety of cutthroat trout to another area.

As always, If you feel you have what it takes to join a dynamic group of volunteers, don’t hesitate to write us at info@thegreenbacks.org

During the angling event we removed 109 fish across approximately 2 miles of stream.
On 9/16 a CPW crew returned and removed 217 fish across 0.5 miles of stream (Fishing Reach 1) using backpack electrofishing equipment
On 9/17 a CPW crew removed 151 fish accross an additional 0.5 miles of stream (Fishing Reach 2) using backpack electrofishing equipment
Thus, we removed and transplanted 477 fish total from Herman Gulch!  All fish were released in Clear Creek at the Bakerville exit bridge.  These fish all received an adipose fin clip to aid in tracking them in the future.  If you happen to fish Clear Creek and catch one of these fish, either Paul Winkle (paul.winkle@state.co.us) or myself would love to hear about it.  (FYI- the adipose fin is the small fleshy fin between the dorsal and caudal/tail fin).  If that fin is missing, then you know it was one of the fish we moved. 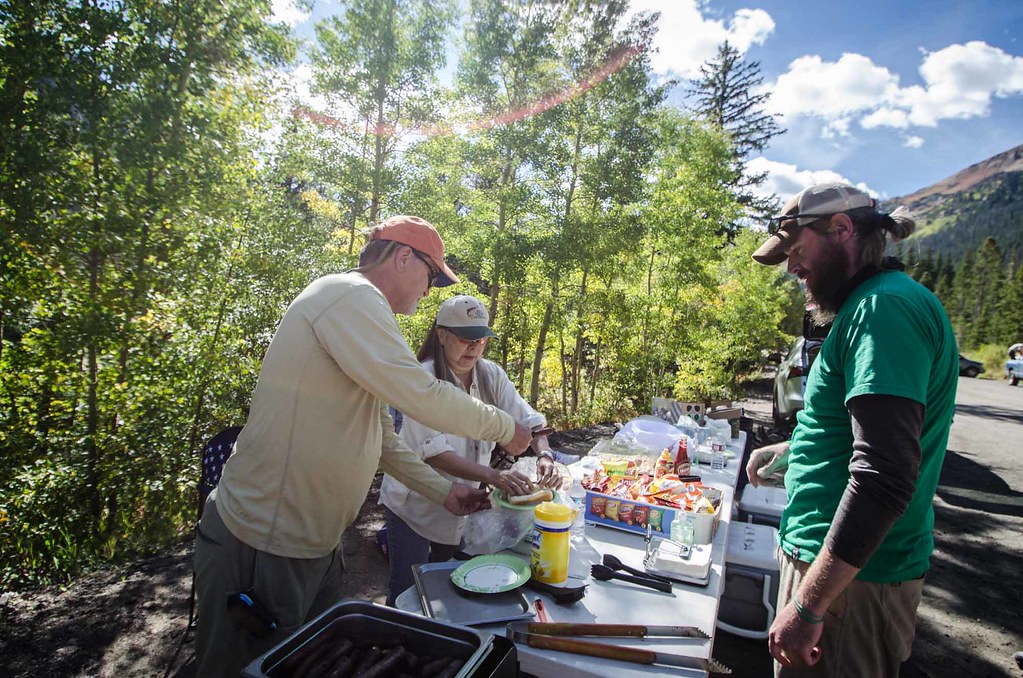